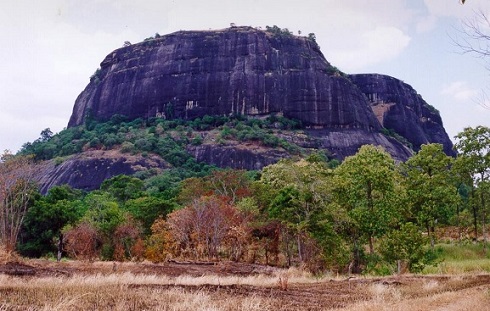 One of the old posts, I discussed my experience with Dimbulaga exploration. It should be one of the hidden fortresses like places in Sri Lanka. There is another rock full of ruins of a massive fortress and this is also a hidden one by means, till today. Now we are going to talk about “Nuwara Gala”.

In my school days, once I am given a very nice book about expeditions by a team of wildlife enthusiasts, who tried to explore nice natural places of Sri Lanka. Actually that book made me interested in hiking and nature expeditions. This book was almost a basic guide book to young people who wish to explore such beautiful places. Mr. Douglass B. Ranasinghe (a reputed bird watcher and wildlife enthusiast)* is the author of this book called “Maki Yana Wana Peth” (i.e. vanishing trails). It contained a chapter that illustrates how they explored this massive yet hidden site a long time back.

It took us decades to do the same expedition, since the relevant area was highly affected by the LTTE terrorist activities. Anyway, we headed to this wonderful site in 2002 sepetember, when it was the ceasefire and quite safe to enter the location. 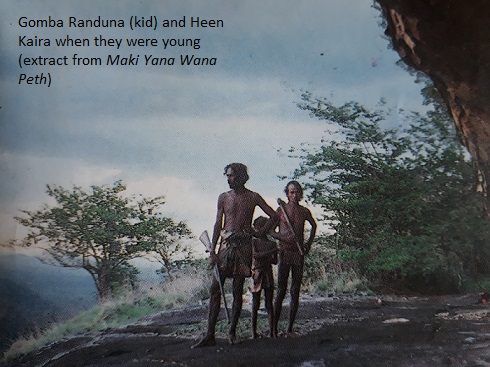 First, we went to Pollebeddha School to prepare our stuff and spend the night before starting the hike early next day. It was a very nice place and principal too was a very nice gentleman. The Vedda chief Gomba came to see us in the same evening when he got to knew that some people had come from Colombo. He was so old than we saw in pictures in the book. When he was having a leisure chat, he revealed about his interactions with Dr. Spittle and good old time stories. Most of all, he told how much he miss Dr.Spittle and he at least wanted to see his daughter. 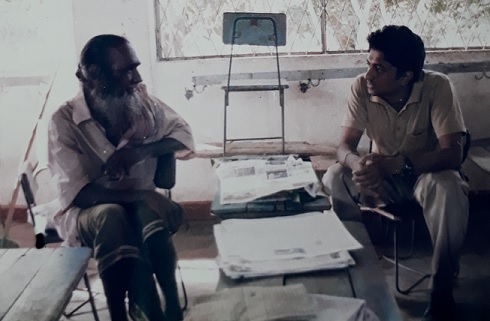 There is something else I want to note here: These Veddha’s life conditions seemed so pathetic. Their lives had been vastly affected by poverty. May be due to lack of knowledge on family planning, their families had become unbearably big, yet they didn’t have any means of earning money to feed them. We just shared some of the food we brought, but it showed the need of a long term rehabilitation program for this community. Not like Veddas of Dambana, this community seemed to have a lack of knowledge on outside world and lack of communication with authorities.

After a couple of years, I saw in the newspapers, that Gomba had been awarded the Kala-Bhooshana award for his contribution towards the culture of Sri Lanka. Of course, it is admirable since they carry some historical and vanishing cultural values to Sri Lankan society, but steps are to be taken to improve their living standards too.

We started the hike the following day with two guides from the village, namely Wijeya and Sadhathissa. Wijaya was an expert on jungle life with unbelievable instinct. He said he was hunting animals for his living. He was with a mysterious and weather beaten face. Our theories on wildlife conservation seemed inapplicable for these people who have day to day confrontations with bitter poverty. We walked behind him and he was leading the team; walked without any noise or talk; carrying his illegal shot gun. Each time, we met a wild animal, Wijaya managed to give us notice in advance! I think he had very much developed ability to smell or hear those in a distance. Sadhathissa was a much talkative small-made person who managed to tell us their experiences with wildlife and some narrow escapes from terrorists!

Under the shades of terrorism, tree-cutting had been done massively and naked earth had been exposed to intense heat of sunlight which made our walking too so difficult, when it was reaching noon.

Our initial plan was to go up to the top of the rock and see the historical pool full of clear water and then we spend the night in the nearby cave right down the ridge of mountain facing a dangerous looking steep.

We had done a big mistake by relying on one spring of water. When we reached, it had been dried and drinking water we carried was not enough to spend two days! I was already dehydrated, that made me difficult to move further. Anyway, we decided to find some more sources for water but I said I need to sit and rest so others could proceed with searching. Due to the threat of wild elephants in the area, keeping me alone for resting seemed foolish and Dr.Nihal volunteered to stay with me with some fire-crackers to use in case. Anyway, search hadn’t been successful, but we came up with the bright idea of using the water in the pool up on the rock for drinking after boiling. I felt much better after some rest and consuming some dried date fruits and Jeewani. We reached the top of the fortress around 3 pm and it was a fantastic feeling!

It was quite hard to believe that a man made pool full of water could remain in such a high altitude. This was a marvelous piece of evidence for the prosperity and high life style existed in the past within the fortress. Mr.Ranasinghe’s book says that water was so pure that they managed to have a nice bath in it, but we saw the pool had been infected with algae and bathing was impossible.

We heard a very strange story from Sadhathissa which explained how this pond got polluted. It was as below;

“It was 1989, where whole country was having a dark time with the rise of young generation against the government. We were coming towards Nuwara Gala for a hunt.. When we reached the top we saw some uniformed people are occupying there.. we also saw a helicopter and few civil people and I identified one of the famous politicians son within them… in a little time those armed people started shooting at us.. We vanished through the bushes and came straight to the village and hide… After that we observed they had tried to pump water out and find something… we didn’t know whether it was treasure, anyhow water within the pool got polluted after this incident!” (Note :I can’t guarantee about the truth of this, but this is what I was told)

After spending some time near the pool we came to the cave and spent the night. It was a Poya day and night was as amazing as could be. View of the jungle towards the steep was like a water color painting.. moon light had given a fantastic glittering effect which made us watching it for a long time before going to sleep.

Next day, we came back in a different route which was rich with most of the ruins and rich historic structures.
Night I spent in Nuwara Gala cave is one of the best nights I have ever spent in wild! 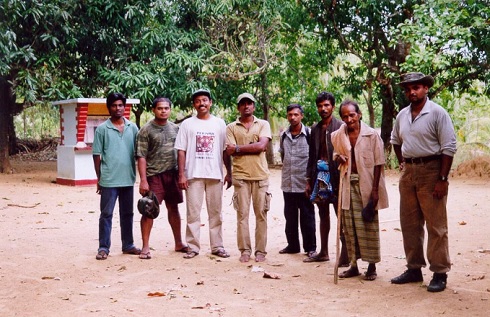 Team before starting the hike (with Vijaya, Sadhatissa and Heen Kaira) 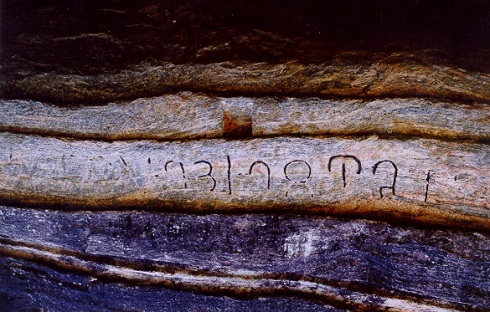 Valuable artifacts to be studied by archaeologists. 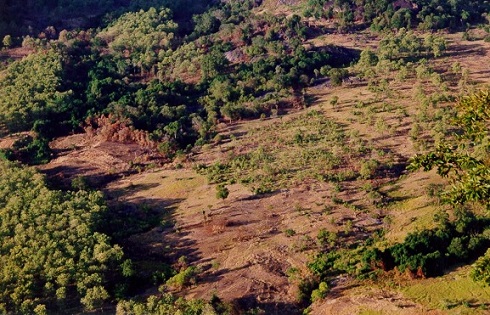 Dangerous yet, beautiful steep down the cave 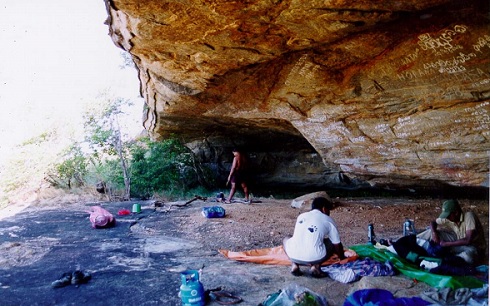 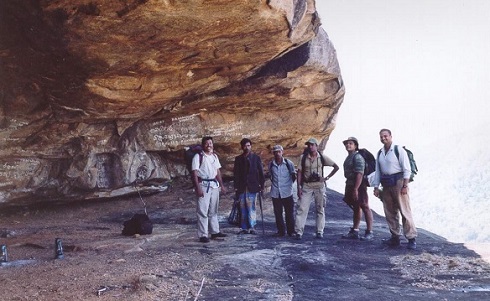 Note
* After sometime, Dr.Nihal Dayawansa introduced us to Mr. Douglass B. Ranasinghe and we told him how his book infected us with enthusiasm for exploring the wild. We also managed to discuss and compare the changes we saw in Nuwara Gala after decades. We wanted to visit this site again as an one group consist of both generations, but couldn’t materialize it till today.
Posted by sumedha Obeysekera at 10:10 PM

Fascinating place! Fascinating account..Thanks for sharing this and I didnt know the existence of this place :)

Thanks for sharing this! I thoroughly enjoyed this.

Machan, Just heard from Channa that the pond at the Nuwaragala is destroyed. According to Amith sir from Pollebedda school, with a politician's consents (not the very famous guy for this sort of things, but another from same area )some ppl had used dyna to drain the pond. So no more water in that pond. :(

hi Sumedha
very nicely written, i just came across this write up by you after visiting this fabulous place yesterday! it is simply magical and the pool was full of water which forced us to have a dip in it though there were few floating elephant dung!
hop this would be prserved
rgds
Ashan

It is great you had the privilege of experiencing it. In deed this is a magical place. This is one of the best hikes I ever had. It’s pathetic if we fail to preserve this.Thanks for the kind comments.