Role model in Conservation of Wildlife

Officers of the government sector are being hammered by most of the media and people due to their inefficient working pattern and lack of positive attitudes towards the duty they got to perform. Department of wildlife is only one such government department which is being criticized by so many ways. While I started to hang around wild places since I was a school boy, I simply realized how hard their job should be. Any way, all the claims raise against them are not just speculations; there are a lot of corrupted and unbelievably lazy people in the scene.

Any way, there are some counter examples, who have committed the maximum to serve the country and do their job accurately. In one of the past posts, I revealed about one of the great wildlife officers I have met and his tragic end. (i.e. Mr.Kumarasinghe) There was only one another officer I can recall, who was inspired to do the job so cleverer. That’s Mr.Wasantha Pushpananda. End of this officer too was not with much difference from Kumarasinghe’s. Kumarasinghe was killed by poachers while Pushpananda was killed by terrorists! This world is not a fair place at all.

I first met Mr.Pushpananda while he was the park warden of Gal Oya National Park. I was on a visit to Gal Oya with few other guys from University of Colombo. When we expose our enthusiasm in wildlife and conservation, he was so happy and extended his full support to our work within the park premises. I have never seen such an efficient, dynamic and systematic person on this earth!

He kept park office as clean as a temple. No once could enter it without removing shoes. He was so fast in what he does. For an example, I have never seen someone who drives so fast in wild trails like he does. In other hand, he was so rigid with his laws and disciplinary procedures.

When ceasefire agreement was declared, government wanted to re-open Wilpattu in 2003. Pushpananda was assigned the massive task of converting this neglected park in to a functioning one and he was appointed the warden. I think, his energy and managing skills were well-shown with this unrealistic task. He had to renovate the old bungalows and re-shape the old roads to motor able once. When we visited Wilpattu Pushpananda explained his development plans with us. Specially he was talking to Dr.Dayawansa and got his opinions on his plans.

When he rehabilitates Wilpattu National Park, he didn’t depend on government money. Sometimes he personally went to business people and managed to get some financial supports. He managed to get the help of youths of the area when he needs extra labor force. He was a happy man and he was enjoying when Park was developed step by step. Willpattu became his home! With his efforts, Willpattu became one of the most famous Parks among wildlife enthusiasts very soon.

His death was so tragic! He was killed along with his team consist of wildlife rangers and army officers when he was on the way into the jungle to repair a drinking water tank for elephants. Bodies were found with gunshot injuries and server cutting injuries that showed signs of torture. Pushpananda died within the Park he loved most.. he died within the park he nursed to rebuild. 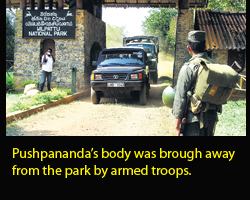 We couldn’t personally attend to his funeral due to an official matters. Anyway, we wanted to convey our condolence to his family members and we head to his village at Diyakitulkanda (off Mathugama) in the following evening after office duties. It was so dark and about mid-night when we reach his home. There wasn’t electricity in that village and we saw a small lamp had been lit in front of the house. When we spoke to his brother, we got to know the things we didn’t know about this great person. He had been so simple in his life; any of the villagers didn’t know about his massive important role in Sri Lankan wildlife. His brother started to cry when we expose our condolence.. Tears of a male are always heavier!

Since we have a peaceful surrounding today, Willpattu will be reopened and come up to the pinnacle of its state as a very important Wild Life Park in Sri Lanka… Only few would remind that, the soil of Willpattu had been fertilized with the tears, sweat and blood of a true hero of the nation. 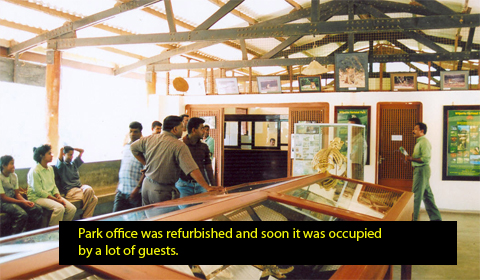 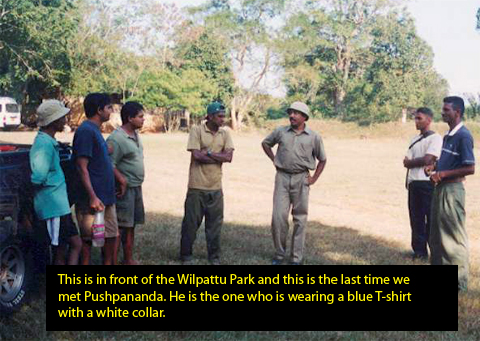 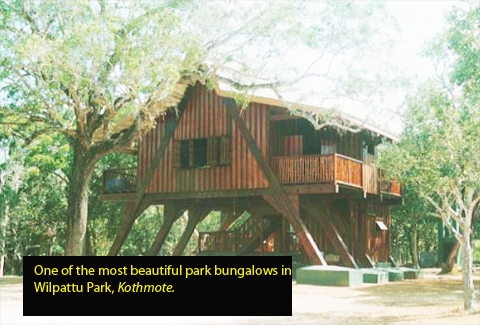